Pumpkins in the Rough 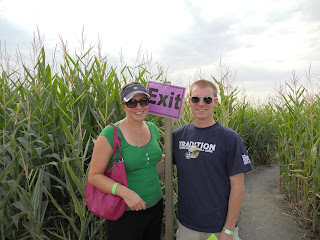 You can get pumpkins much closer to base, but we trekked out to the Murray Family Farms (62 miles west on Rt 58) for the full experience. Their $10 deal this year got you a hay ride to a pumpkin patch where you could pick a small pumpkin, a couple of weak corn mazes, a petting farm and pig races.
The pumpkin was worth about $3 and the corn mazes another $2 (we didn't pet the goats). And had that been all we did, I would have left unhappy. But some guy in a trailer brought four pigs and used Velcro to secure colored jerseys to each. He set up a chicken wire racing track and sent the pigs on a race. I've never seen such a spectacle. The Antelope Valley Fair had 'Mutton Bustin' last year (kids under age 6 riding sheep). But the pig races were something new and something fabulous. They were worth the $10 admission and made my day.
Murray Family Farms is hokey. The produce is expensive. And it's far. But if you're in the right mood, it can be a hoot, especially if they've got racing pigs!
Consider stopping at the Tehachapi Loop to watch a train loop over itself at this engineering marvel. And plan for dinner in Tehachapi on the way home.
Posted by Jeff at Monday, November 29, 2010

Labels: California, Close By, For the Kids, Tips and Tricks