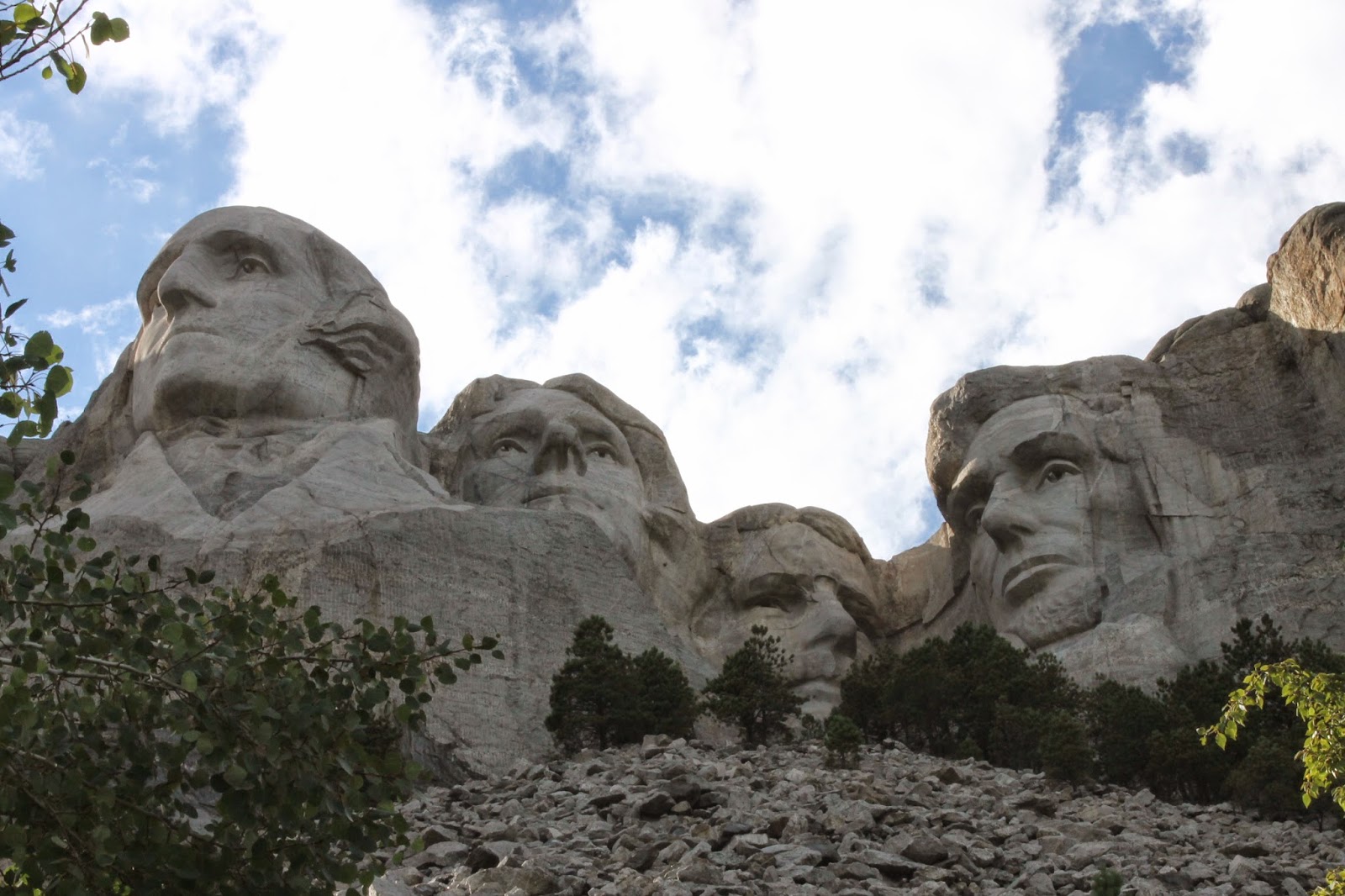 Turns out Rapid City, South Dakota is full of things to do! It has been on our "in striking distance" list since moving to Colorado. Honestly, I had pretty low expectations. I thought I would be underwhelmed by a few faces carved into rocks. I wasn't really sure what else to expect, but I wanted to mark it off my National Park list.

One late summer morning we packed up the car with our two-year old and 3 month old and we were on our way.

Turns out our kids to pretty well in the car. I did have a few fun road trip toys planned for the two year old. A laminated map is always a hit. I also bought some train magnets (we are very much into trains right now!) and I had a magnetic cookie sheet. He loves this toy and it only makes an appearance on road trips. Our library also has playaways, which are portable pre-loaded videos that I saved for those melt down moments. I also checked out two books and CD's from the library. These new toys, in addition to the box of books I typically keep in the car, made the drive fun and easy.

We broke the drive there up into two segments so the kids would have some out of the car time. We stopped for the day in Scottsbluff, New Mexico  We stopped by the Scotts Bluff visitors center, the children prevented us from watching the 12 min video but we did make it in time to drive up to the top. Much to our two year old's delight there are three tunnels on the drive to the top. (No new traffic up the road after 5:30pm.) There is a short hike at the top with amazing views. We also did a little walk by the visitors center that goes past some reproduction wagons and to wagon ruts... we never conclusively found the wagon ruts. We could see Chimney Rock from Scottsbluff but decided not to venture out of our way to get a closer look. 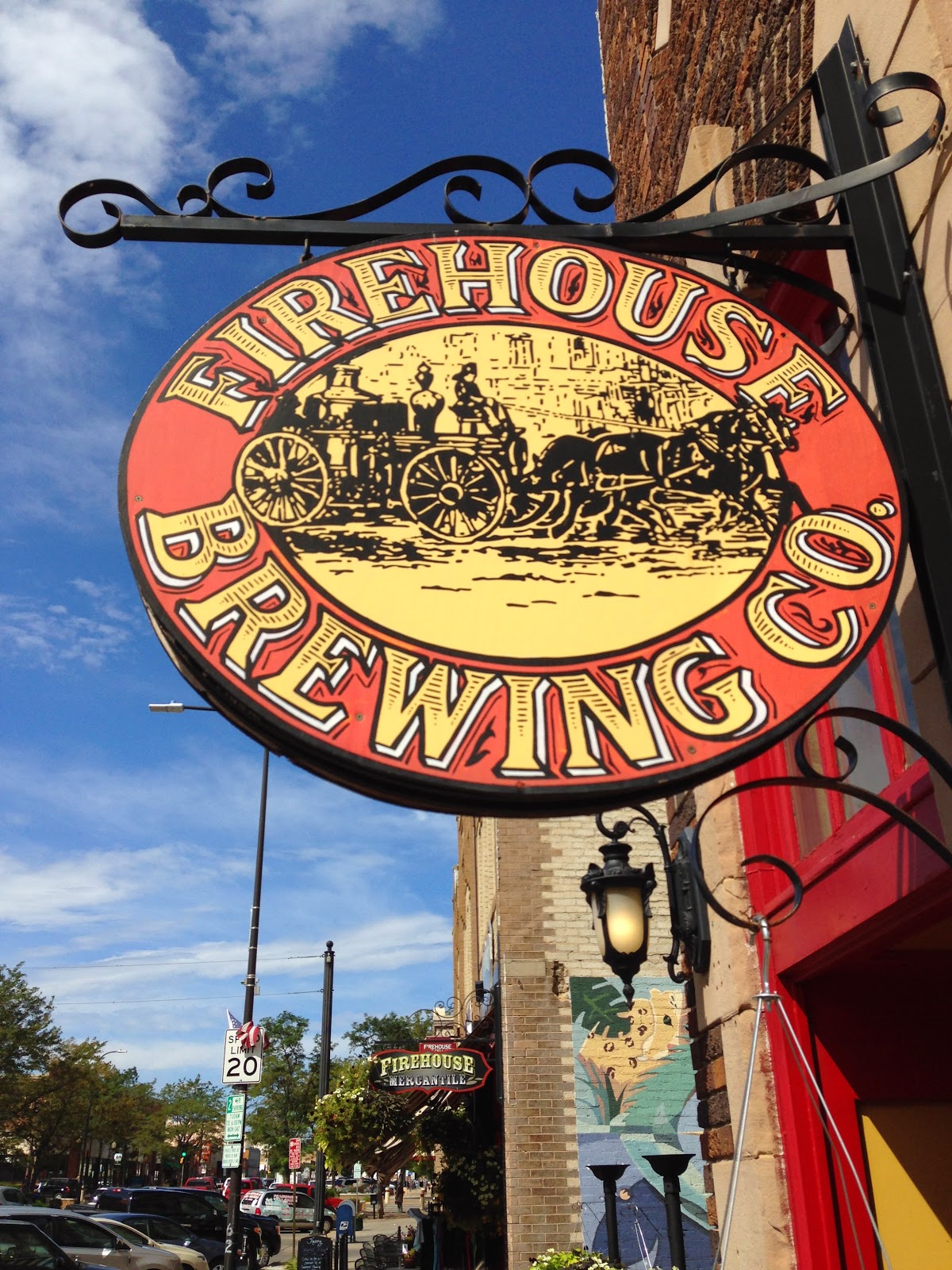 The next morning we completed the drive to Rapid City and checked into the Hotel Alex Johnson downtown. The Alex Johnson has lots of old charm and the only downside is parking is two blocks down the street in the public garage. They have a loading zone in front of the hotel for drop off and pick up.

We grabbed lunch just across the street from the hotel at the Fire House Brewing, Co. The location is great and the restaurant is very cool, full of lots of old firefighting stuff. Service wasn't great and the food was just OK. The beer was good though. I would recommend grabbing a beer here, but skip it for meals.

Our first stop was Storybook Island. This place is crazy. Hundreds of playthings themed after everything you could imagine.  There are slides, swings, diggers and tons of plastic figures. We could have played here all day, but it started to rain.

Once we put everyone in the car the kiddos fell asleep so we decided to drive across town to Mount Rushmore. On your drive from Rapid City you pass a ton of places that look kitschy but interesting - we did not have time to check these out but you certainly could.

Since the kids weren't awake we took the long way through Needles Highway. This is a beautiful drive, although winding. Our favorite part was passing through several rock tunnels that were nearly as wide as our car. This road does take you into the sate park, where you have to pay a separate entrance fee. Following the highway all the way through the park will return you to the road leading to Mount Rushmore. (You also get a cool view of Mount Rushmore through one of the rock tunnels.)

I had low expectations for Mount Rushmore itself, but I wanted to check it off my National Park list. I was pleasantly surprised. The facility they have built is beautiful and affords great views of the monument. The loop walkway is a bit steep, but not at all unmanageable even with the kiddos. The walk provides spectacular views of the mountain and culminates in a visit to the Artists Shed, where much of the planning for the monument was done. Not to be missed is the museum located at the top of the amphitheater which features incredible stories and pictures of the monument being carved.

We grabbed some ice cream at the restaurant and enjoyed the view from the outdoor tables. The entire family split a small ice cream by asking for an extra bowl! We were trying to kill time to make it to the lighting of the monument, but with two little kids we knew when to throw in the towel and back to the car we went.

As a note, although the monument is free the parking will run you something like $12 - but your pass is good for the full calendar year. 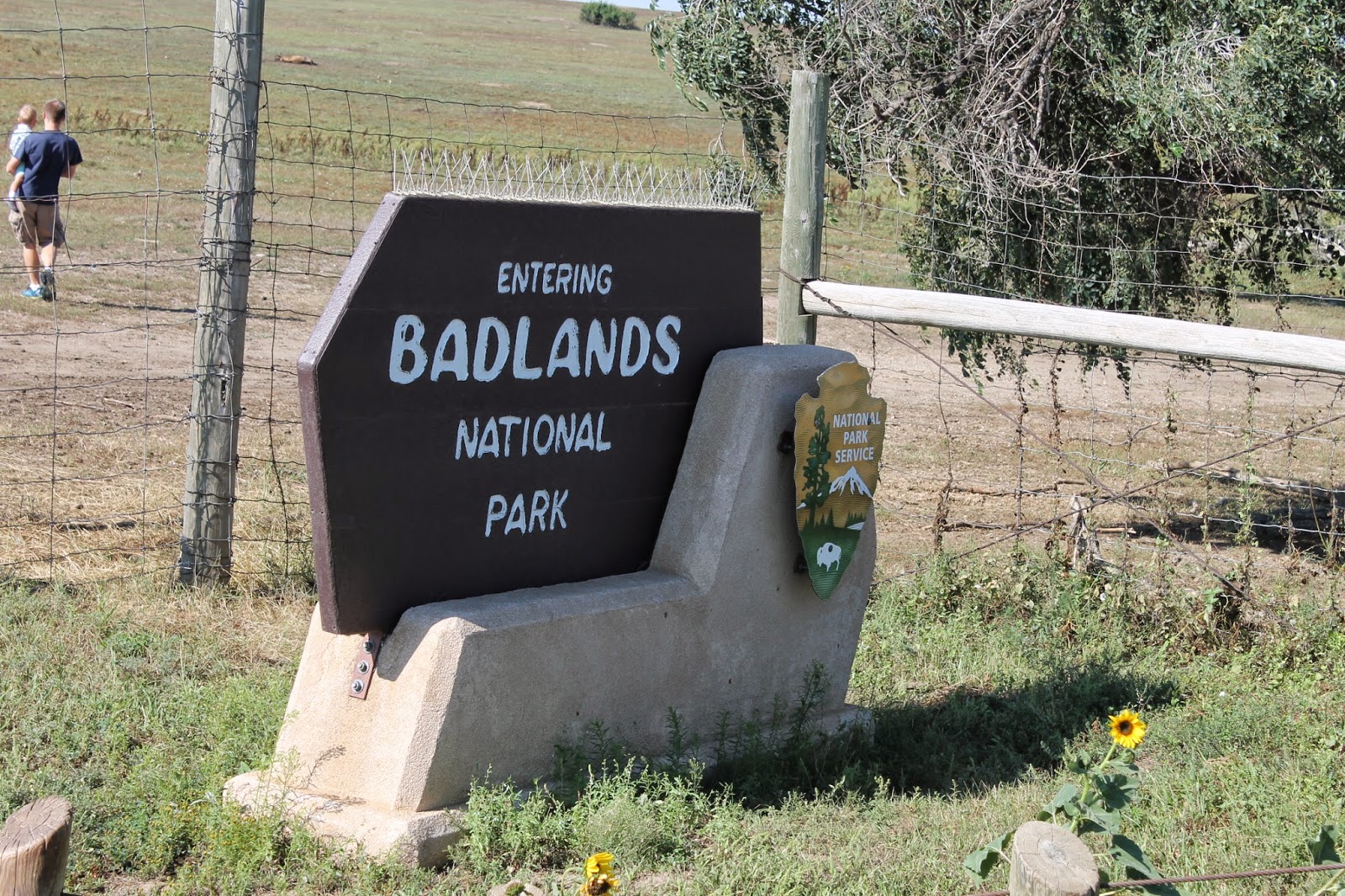 Also within driving distance is the Badlands National Park. This place is full of amazing rock formations.We stopped and took a quick hike out into the badlands, it gives you a whole different perspective.
The kids did not so much think the rocks were cool but they loved the animals... which were not hard to find.


Make sure you pack a lunch because there are NO OPTIONS inside the park. I would recommend grabbing something before you leave rapid city. There are tons of picnic benches on which to enjoy your lunch.

On our way out of the park we stopped for a quick gander at the Worlds Largest Prairie Dog. The kids were asleep so I hopped out to get a quick photo! 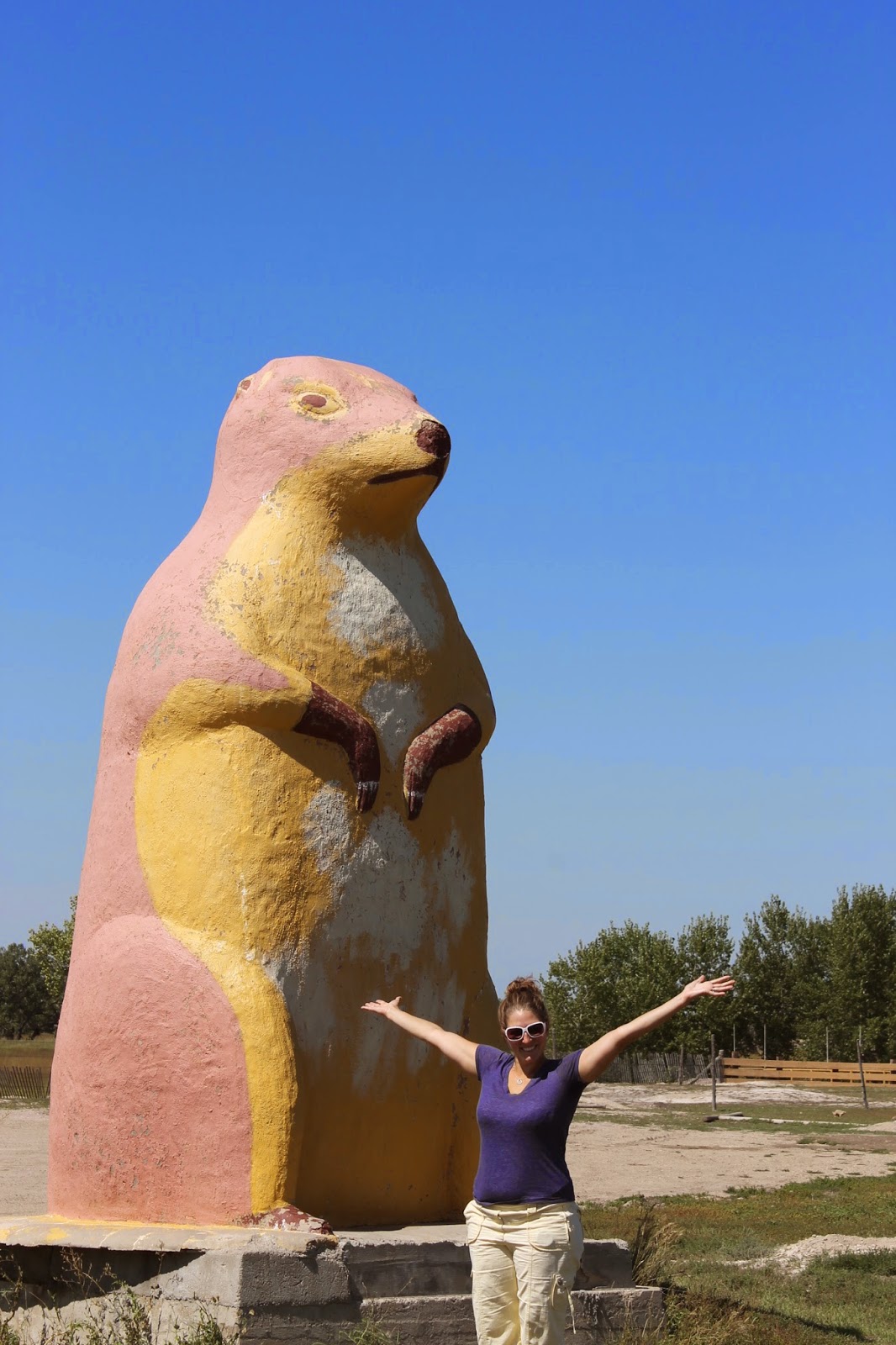 Equally as weird was the stop at the tourist trap Wall Drug. You should stop there because it is just that weird... and crowded. We sat on the back of the Jackalope and got a free Veteran's doughnut and got back in the car.

Back in Rapid City don't miss Dinosaur Park, where you can climb on the back of six huge dinosaurs. Our little guy just loved hanging out by their feet. Not quite as cool as Storybook Island, but still worth the visit. There are a few smaller dinos at the store next to the parking area, so don't miss those. 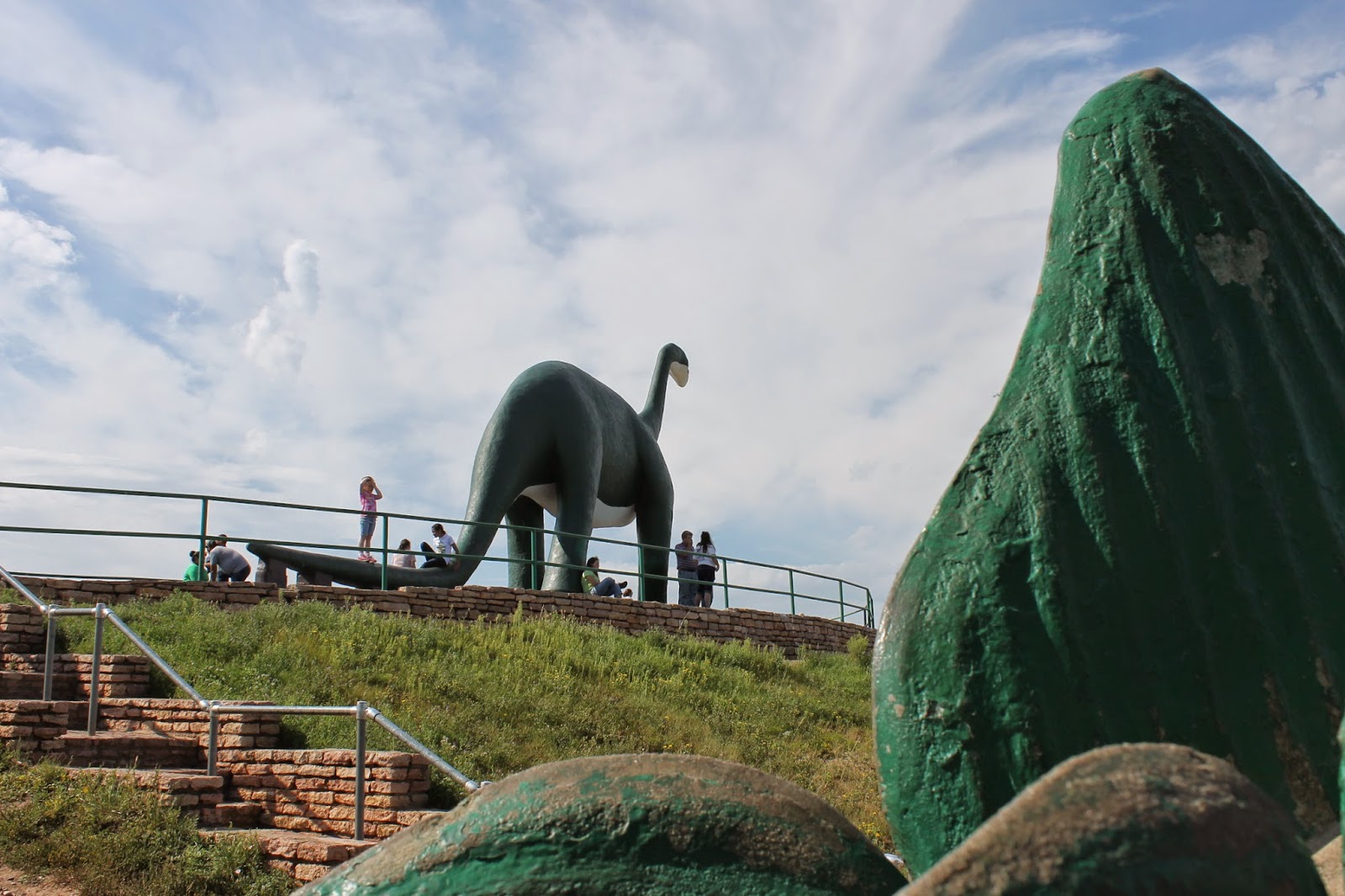 As a special treat for our train loving toddler, we booked a trip on the 1880 train out of Keystone. We were extremely lucky to get a diesel locomotive on the way up and a steam locomotive on the way back down. Parking in Keystone is a mess. We were on the earliest train so there was plenty of parking but when our train got back, everything was a mess. We packed lots of snacks for the kids and made sure to sit inside since it is an hour up and an hour back. We also rode up on the front of the train and changed seats to the back for the return.

Once back in Keystone there are a variety of options for both food and entertainment. My husband LOVES alpine slides and my two year old was overjoyed to try it with him. They rode the ski lift up and I literally heard them laughing the whole way down. It may be my favorite memory from the trip.
Posted by Elizabeth at Thursday, October 16, 2014