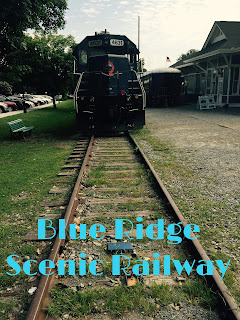 Today we headed up to Blue Ridge, GA to hop onto the Blue Ridge Scenic Railway. It is a trip we have been scouting since H was born. Now that he is train obsessed, and his little brother has followed suit, it was the perfect time.

Arrive on time, the train leaves promptly at 11:00. (Seriously. 11:00.) There is ample street parking on the non-boarding side of the train. If you arrive early there is a playground just a few blocks away.

The train ride is lovely. We chose to be in an open air car and loved that all the seats faced outwards. The climate-controlled cars have traditional train seating that all face forward. The breeze on the train was more then enough to keep us cool. They switch everyone's seats going back, so do not worry too much which side of the train you are on.

I found this great post from Never Enough Thyme about their 2010 Blue Ridge Mountain Railway trip. It takes you turn by turn up the highlights of the railway and is worth a read if you are wondering what to expect.


Now on to the big question. What do you do with two hours in McCaysville/Copper Hill? First, pick a place you want to go for lunch and make a reservation. If your train is full the restaurants in town are going to be swamped. We chose to make a 12:30 reservation at El Rio, the Mexican restaurant in town. The food was good, not the best we have ever had, but very good. We were glad to have a reservation, which we made the night before, as places got crowded.


We walked across the bridges in town,  took pictures on the state line and walked to the City Park in Copper Hill. The train hands out maps and the park is clearly marked. There is a small playground, a totem pole and a dock. This was more then enough to entertain our kids for 30 min. On our way back to the train we hit the rock shop, which was a huge hit with the boys. The train gift shop had some postcards, a big draw to send to H's little pen-pals. Had we more time, we could have grabbed ice cream or watched them make fudge. There were also a few little stores that looked cute, although window shopping with kids is not always fun.

Two-hours seems like a lot, but the time went quickly. We were back to the train at 10'till. The train pulled out of station at 2pm, leaving at least one person from our car at the station. We inquired what would happen to the person and were told their family could drive up later to fetch them. The railroad will also come get you for a $25 fee.

The ride home seems to go by quickly. Most of our train car was in a daze or asleep on the way back. When we arrived back in Blue Ridge, it was hotter then Hades, so we didn't hang around for too long. 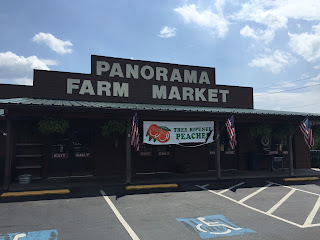 If your driving back to Atlanta consider stopping at one of the apple picking places. We stopped at the Panorama Farm Market. They have a plethora of treats - mostly apple themed. They do have ice cream, old fashioned candy, dried fruit, fried apple pies and apple slushies. We got a variety of treats to share on the way home. 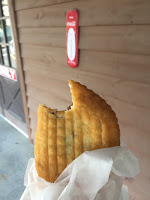 Oh and we grabbed some post cards for H to send to his friends back home... that's how all good trips end. 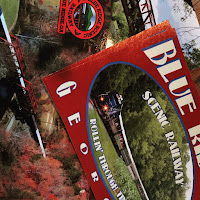