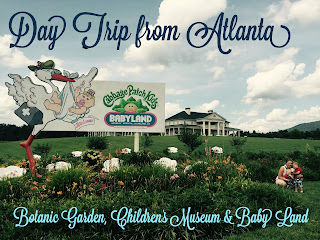 Once again we headed north of the city on I-85 to cross a few things off our Atlanta with kids, bucket list: the Atlanta Botanical Gardens Anex, Interactive Kids Neighborhood and Baby Land General Hospital.

We headed out of the city around 8:45, an hour later then scheduled, thanks to a rough night with the kids and a much needed coffee stop, but an hour later we were still one of the only families at the Gainesville, GA branch of the Atlanta Botanical Gardens. This new facility opened in May of 2015 and currently showcases just a small portion of the acquired land.

We took our stroller but could have left it in the car, as we ended up parking the stroller and putting the one-year-old in our ergo while allowing the three-year-old to walk on his own.


The paved section of the gardens is small, currently covering just the walk down to the train garden and then back up through the stream walk. This was easily done with both children out of the stroller. There is a larger unpaved section that includes two half-mile signed "nature walks." These were a bit more strenuous for the kids, but the three-year-old did them with just a little encouragement. 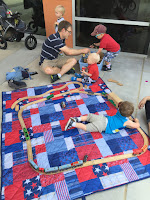 The highlights were the train garden, where the kids can push a button to see two miniature trains run through a set up village.  We spent quite a while here. The staff also set out some play trains on the back deck by the little pond for the kids to play with.

Our total visit time at the botanical gardens was an hour and a half.

We back tracked a bit into town to check out the Interactive Kids Neighborhood (INK). We packed a lunch and ate at the museum. They had picnic tables out front and a few designated eating places inside.

This place is one of the stranger children's museums we have visited. That being said, the kids played here for an hour and a half. 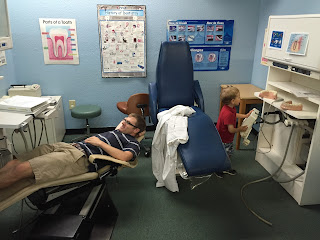 The idea is really cleaver. The museum consists of a long row of rooms that all front a main area. Each room is set up like a different place in a neighborhood - post office, dentists office, grocery store, hospital, theater stage, farmers market, dinner, bank, vet, music room, x-ray lab, school, courtroom, red cross building (had a tv and a huge red cross sign), a barn and a TV station. The rooms however are dated and, although clean, not well organized. (No clear place to hang the costumes. The walls are crowded with posters that are tangentially related to the room topic and ideas on how to play in the room with your children. Most rooms were missing critical play pieces or pieces looked extremely dated.) I perceive that part of my problem is we have seen all these themed rooms done "better" at other museums. The novelty here though is having them all in the same place to seemingly run a small city as a child. 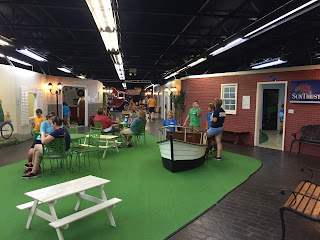 Once you reach the edge of this hall the idea falls away a bit and the exhibits get a little random. There is an old firetruck that you can climb into and sear, but you are prohibited from climbing into the back. There is a police car that you can, again, climb into the front, but not the back. You are able to toggle the police lights. There is a play space for toddlers and a climbing play space (think fast food restaurant play place) for older kids. There is a small twin engine plan to crawl into. 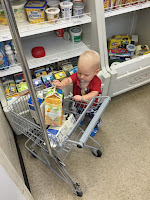 At some point someone must have thought there was not enough stuff here to do because all the remaining space is filled with random toy. These toys are organized into categories but they are random in terms of the theme. There are three train tables, which of course were a big draw for my kids.


Then we move into the completely random exhibits. A box full of toys that could be activated by pushing buttons. An area on eating healthy, that served as a complete contradiction to the type of groceries stocked in the grocery store play area. A train, that was actually a painted recycling station.

This place has a great idea, but needs a bit of focus and a new coat of paint. I would not drive up just to visit, but if you are in the area it is worth a stop. The kids had a blast. 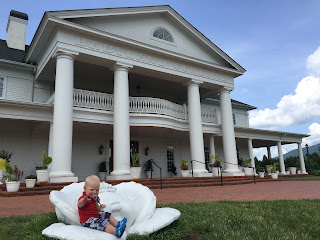 The kids had a great car nap as we pushed the 36 minuets up the road to Baby Land General Hospital, home of the Cabbage Patch Kids. This is basically a huge gift shop for Cabbage Patch. They really commit to the whole hospital theme, you sign in when you enter and the staff is dressed like doctors and nurses to help you find a baby to adopt. Our boys loved it. 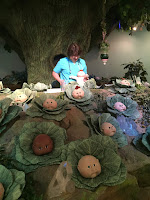 We watched as a doctor assisted "Mama Cabbage" with a birth. The show is enthralling for the kids and humorous for the adults. The visit itself is free, but the babies are not cheap. If you want to "adopt one" the fee is $60 for a baby with a plastic face and upwards of $200 for a cloth face. There are cheaper babies available, but they are boxed like you would get at Target, and not up for "adoption." 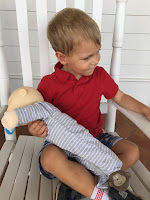 We knew this before going and were prepared to let the boys get one baby. He asked the doctor for help finding the perfect baby and finally found a bald baby boy, with brown eyes in the perfect outfit ready for adoption.

You can purchase accessories there, but the nurse let me know that all their babies wear premie size clothing from Carters, so you can also find additional outfits there.

After the official adoption we took our new baby boy out on the porch to play a bit. There is a huge lawn to run in and rocking chairs for sitting. There are also picnic tables on the property if you are looking for a place to have your picnic. 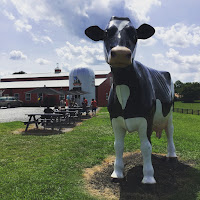 Our final stop was Mountain Fresh Creamery, which is conveniently on the road back to Gainesville, GA, where you pick up 85 to head back into the city.  The ice cream is sold right from the window in the milk can and there are plenty of picnic tables with umbrellas. Inside the store you can sample their milk or cheese and see inside the dairy. Walk around the fence line to see the cows at pasture or headed in to be milked. I ended up running back into the store for a $1 quart of cold milk to enjoy on the drive home - its seriously that good!

We did this itinerary on a weekday, so crowds were very low. It was a great way to get out of the city and see some things we had not done before.