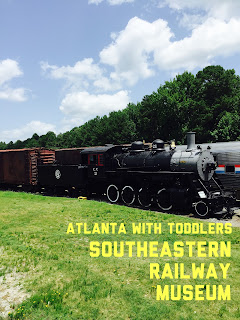 Last week, before we headed out to Erie, PA we headed up this way to the Southeastern Train Museum.  We were at this museum in 2014. BOY! The've made some changes. Most notably, the "Second Thursday Preschool Program," which I will just call Toddler Time.  Toddler Time happens once a month and brings a theme to the railroad museum from 10:30-12. When you check in, you get a wrist band for the adult in your group and a schedule. Each group cycles through activities. We went to one focused on Police Cars. We completed activities about traffic lights, learned about dialing 9-1-1, met a real police officer, and listened to police themed stories.

After Toddler Time is over they run the miniature train and then the historic train. These tickets are separate from the Toddler Time fee. The historic train is a bit of a let down. The cars are converted cabooses, but they have minimal windows to see anything out of. The train runs up the track 100 yards, switches track, runs back towards the roundhouse and then does the cycle in reverse to return to the "station." My three-year old loved watching us go through the switch so it was worth it, but not the best "train ride" we've been on.

The miniature train can be likened to a zoo train, which makes two loops on their track. They are currently working on a tunnel and other track improvements to this small train.

Since our last visit they have added an entire room of museum quality train pieces - uniforms, china, train pins - in addition to a small working model railroad.  Several more trains have been restored and opened to walk through. They have a list on their webpage that lists their current train inventory.

Several of the busy train lines run right past the museum, so you are guaranteed to see several trains come by. The Engineers know the museum is here, so they wave and blow the horn to the delight of all the children. 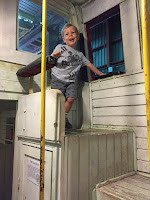 If you are doing toddler time and your kids love trains, arrive at 10am when the museum opens so you have some time to climb on the trains. The 30 mins prior to the program was enough time for the kids to hop on to a few of the open cars and check them out so they were not asking to do that as we changed stations.

If your kids eat at 11:30, like ours do, pack a lunch and plan to skip one of the stations. Our Police Car visit got out early, so we grabbed lunch out of the car and ate in the pavilion between stations. The program runs till 12:30, at which time both trains run... so if you don't have lunch packed and want to ride both trains it will be after 1pm before the kids get fed.

If you are just going to the museum, call first to confirm the train schedule. It varies seasonally so you will want to check and see what the schedule is before you plan your visit.

There are a few indoor exhibits, but most of the museum is outside and can be very hot. Pack water and bring hats and sunscreen. 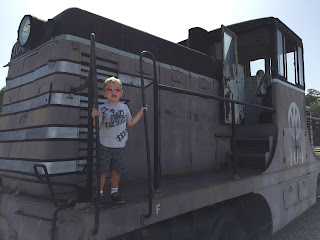